BAD PEOPLE – The Party Game You Probably Shouldn’t Play with best price in our store. Take a look our best price for you.

A card game is any game using playing cards as the primary device with which the game is played, be they traditional or game-specific. Countless card games exist, including families of related games (such as poker).

A small number of card games played with traditional decks have formally standardized rules, but most are folk games whose rules vary by region, culture, and person. Games using playing cards exploit the fact that cards are individually identifiable from one side only, so that each player knows only the cards he holds and not those held by anyone else. For this reason card games are often characterized as games of chance or “imperfect information”—as distinct from games of strategy or “perfect information,” where the current position is fully visible to all players throughout the game. 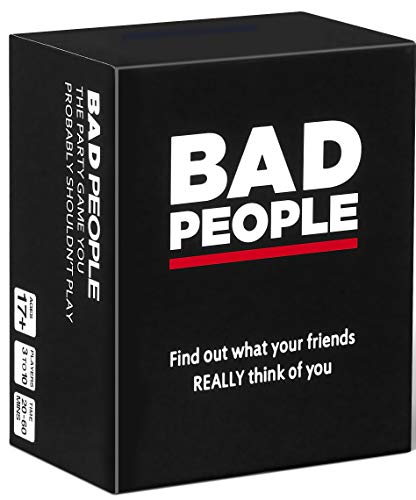 HOW TO PLAY: It’s simple — take turns drawing a card from the top of the deck. When it’s your turn, read the card out loud and either you or the group will drink based on the prompt on the card, depending on what it is. Lather, rinse, repeat. Designed for 3 to up to 20 players. WHAT’S INSIDE: 180 cards, printed on premium playing cards (thick with gloss finish); shrink-wrapped in a custom box.

By purchasing this game, you release BUZZED from any and all liability related to or stemming from any game play, including from any action, inaction, or use of the game by any player, and you and all players further release BUZZED from any claims or actions of any kind resulting from any game play. You further acknowledge that if consuming alcoholic beverages when playing this game, that you are at least 21 years of age and that you will play responsibly. Alcohol consumption is not required to play this game.

You're viewing: BAD PEOPLE – The Party Game You Probably S $29.95
VIEW DETAILS
We use cookies to ensure that we give you the best experience on our website. If you continue to use this site we will assume that you are happy with it.Ok