An action figure is a poseable character doll made most commonly of plastic, and often based upon characters from a film, comic book, military, video game, or television program—fictional or historical. These figures are usually marketed toward boys and adult collectors. The term was coined by Hasbro in 1964 to market G.I. Joe to boys (while competitors called similar offerings boy’s dolls).

According to a study in Sweden, action figures which display traditional masculine traits primarily target boys. While most commonly marketed as a child’s toy, the action figure has gained widespread acceptance as collector item for adults. In such a case, the item may be produced and designed on the assumption it will be bought solely for display as a collectible and not played with like a child’s toy. 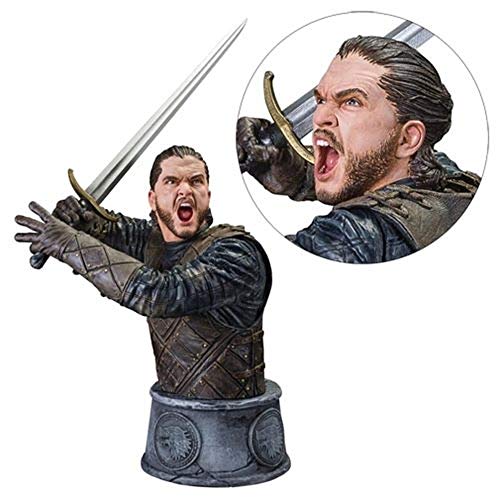 Game of Thrones is an American fantasy drama television series created by David Benioff and D. B. Weiss for HBO. It is an adaptation of A Song of Ice and Fire, George R. R. Martin’s series of fantasy novels, the first of which is A Game of Thrones. The show is filmed in Belfast and elsewhere in Northern Ireland, Canada, Croatia, Iceland, Malta, Morocco, Scotland, Spain, and the United States.

The series premiered on HBO in the United States on April 17, 2011, and concluded on May 19, 2019 with 73 episodes broadcast over eight seasons. Set on the fictional continents of Westeros and Essos, Game of Thrones has several plots and a large ensemble cast, but follows three story arcs. The first arc is about the Iron Throne of the Seven Kingdoms, and follows a web of alliances and conflicts among the noble dynasties either vying to claim the throne or fighting for independence from it.

The second story arc focuses on the last descendant of the realm’s deposed ruling dynasty, who has been exiled and is plotting a return to the throne. The third story arc follows the Night’s Watch, a brotherhood defending the realm against the fierce peoples and legendary creatures of the North.

$19.19
We use cookies to ensure that we give you the best experience on our website. If you continue to use this site we will assume that you are happy with it.Ok